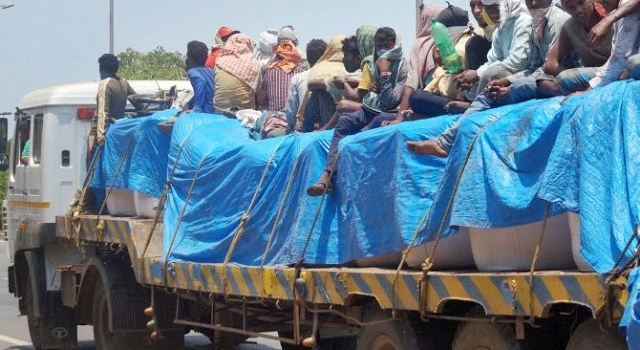 This article first appeared on counterview.net.

Lockdown in the wake of the coronavirus threat has seriously affected the livelihood options for the migrant workers and daily wage earners. While the government has announced that they will be given free ration, even if they are not linked with local Fair Price Shop (FPS) under the Public Distribution System (PDS) — which is the case with most migrant workers across India including the brick kiln workers in Kanpur and other places — the ground reality is very different.

Even after two months of the unprecedented lockdown, there are no arrangements for the benefit of stranded migrant workers in the country. With no means to go back to their villages due to the loss of jobs in the informal sectors and no means of earning a livelihood, migrant workers and their families, including very young children, have been forced to walk on the highways — travelling from Maharashtra, Gujarat, Madhya Pradesh, Delhi to their homes in Uttar Pradesh and Bihar.

The Prime Minister had little idea of the impending problems which were going to be faced by migrant workers when he asked people to stay inside, which started being parroted by anybody who was somebody, and clap from their balconies for frontline workers including medical professionals who were dealing with the emergency situation created due to coronavirus. He asked owners of private enterprises to continue paying salaries during the period of lockdown.

That most business persons, who would have participated in the clapping and switching off their lights gesture on a call given by the PM, didn’t pay salaries to their employees is quite obvious from the mass exodus from cities and industrial centres.

When it became unbearable to stay in small closeted spaces with more people than could be accommodated while maintaining physical distancing norms and no income for the past month and a half, people became desperate and poured out on the roads. The fear of dying of hunger and claustrophobia was gnawing more than the threat of coronavirus.

The government, which should have arranged transportation in the first place, was caught unawares. They vacillated between the policy of preventing human gathering and quarantining people coming from outside to ignoring the safeguards while seeming to overlook the migrant workers on move. They were apprehensive of a workers’ revolt and hence continued to play hide and seek.

We are already witness to scenes of violent clashes between workers and police trying to contain them. The police was getting confusing signals from the top. The result was total mismanagement. The tragedy of migrant workers in transit is an India unique phenomenon and hence points to utter ineptitude of the government.

Truth is also emerging that the government was under pressure from the capitalist class not to let the workers return home for the fear of labour shortage which would hit their operations, some in Gujarat going as far as to suggest that punitive action should be taken against returning migrant workers.

Not willing to grant them any rights or enter into any long term written contracts with them to offer any kind of social security, the owners of private companies treat them like bonded labourers. While unwilling to be held accountable by the government or society towards their workers they want to hold the workers hostage.

Hence the government did not show the kind of alacrity it did in case of transporting coaching students from Kota or pilgrims from Gujarat and south India visiting Haridwar and Varanasi, to bring the migrant workers home. This compounded the tragedy. First, when the police would not allow them to travel on the road, they took the rail tracks route. However, after the accident near Aurangabad in Maharashtra on May 8 in which 16 workers got killed by a train as they were asleep on the railway track, the authorities became lenient with workers travelling via road.

Workers took whatever vehicle they could manage — bicycle, motorcycle, ride on truck tops, autorickshaws from Mumbai and Delhi going into hinterlands. When after the Auraiya road accident in which 25 people were killed on May 16 the police again became strict, not allowing any travel on road. The migrants had no other option but to take the route through agricultural fields and internal roads. Even the people engaged in relief operations were finding it difficult to reach help to the needy travellers avoiding the police.

The common people had to struggle on three fronts simultaneously – the threat of coronavirus, the scare of hunger and the highhanded ways of government. The government should have anticipated the sheer numbers of workers and accordingly arranged trains and other transport facilities for them to reach their destination as they are entitled and have a right to lead a dignified life like the rich and middle class of this country. If the government could not do it before imposing lockdown because of lack of foresight, they could even do it now to alleviate the pain and suffering of lakhs.

Immediate proper transportation facilities, preferrable by trains with feeder bus services, mobile medical facilities for the migrant workers, hygienic, comfortable accommodation with food and water while they are in transit and before they reach their homes should be arranged by the government.

The government should make it clear whether pompous sounding Vande Bharat programme is meant only for the stranded Indians abroad or does it have any plan for the migrant workers of this country who are the second wheel of the economy besides the agricultural workers?

Vijaya Ramachandran is a social activist based in Kanpur