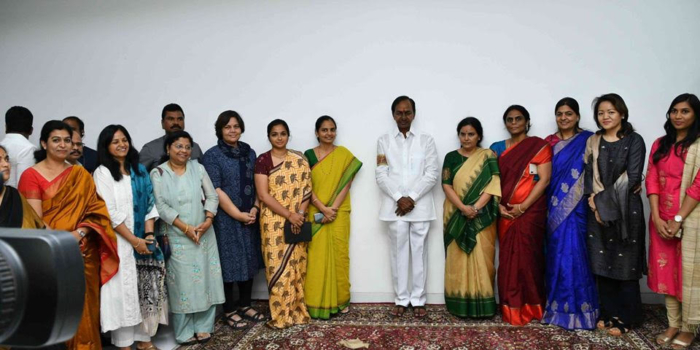 The nature of the recent ‘Birthday Celebrations’ of a constitutional head viz., the Chief Minister of Telangana was highly unimpressive and abhorrent. The official CMO page displays 108 pictures and announcements about how IAS and IPS and other constitutional heads met, bent and greeted the CM at Pragathi Bhawan.

Is it part of the officials’ duty to greet the CM? Why were they greeting the CM during their official duty hours? How much of public time was wasted? Collectors can’t meet the public but are meeting the CM for his ‘birthday’!?

So many appointment letters are waiting for the CM’s acceptance and time.  Even the SPI & UCF letter delivered at the CMO office on 30 December 2019  is yet to receive a reply,  but this is how the CM makes people wait to greet him on his birthday.

Here is a comment on the CMO Facebook page by Rajanikanth Reddy,  “Sir, common people, Senior citizens, school children waited at the main gate (outside) since 8:00 AM to 5:00 PM. They came to wish you but not any favour personally. You met MLAs and Ministers but forget the real votes and well-wishers. Many Many Happy Returns of the day KCR Garu. Hope you can understand the situation out there.”

While police have lathis in their hands when they are among the public, they have flower bouquets in their hands for you! We hope to see an upgrade in the attire of the Telangana Police which does away with the stick as part of their uniform. It is an insult to citizens as well as to the police staff.

A Chief Minister should encourage democratic and participative measures in his government. But your office openly publicised these extravagant celebrations on your official pages, even as numerous government orders/cabinet resolutions remain shrouded in secrecy. It is highly ironic that your government has been questioned recently and many times earlier by the High Court for not updating the Government Order website!

Not to mention the haphazard tree plantation that was done in the name of your birthday at the call given by your son, the MAUD minister, which speak volumes about how the government prefers to follow mindless populism, rather than rational and scientific knowledge-based governance.

It is also shameful, to say the least, that schoolchildren were involved in these ‘birthday’ celebrations. Was it the mandate of the HMDA to organise a plantation drive on the occasion of the CM’s ‘birthday’? Why was the GHMC Deputy Commissioner at a dargah to carry out the plantation and a ‘dua’ for the CM’s ‘birthday’? Is this part of his duty? Surely God would not bless such a narcissist mindset and such abuse of power.

This is indeed pathetic and a symptom of the decaying of governance in Telangana.