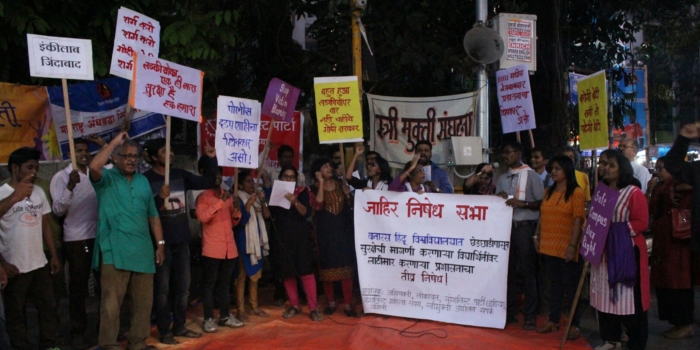 All of you must have by now heard of the brutal lathicharge in BHU, Varanasi on the girls protesting the growing incidents of eve-teasing on the campus. Socialist Party (India) Pune Unit quickly organised a protest against this. Socialist Party (India) together with Lokayat, Abhivyakti and Stree MuktI Andolan Sampark Samiti took the initiative to organise the protest. On Sepember 25 at 6.30pm at Goodluck chowk the demostration started with the protest songs and sloganeering.

A few details about the incident.

After the BJP came to power at the Centre, it had appointed G.C. Tripathi as the Vice Chancellor. He is a person with no academic publications or citations or papers to his name, and who openly praises the RSS. Within just two years, he has converted this world famous university into a laboratory of Manuwad. The university has become an RSS fortress where the “the worst kind of gender discrimination and moral policing” is now rampant (according to a newsreport in India Today on March 1, 2017). It has created an atmosphere wherein goons have become encouraged to openly molest girls, and the administration has turned a blind eye to these incidents.

This time, a few days ago, motor-cycle borne men molested a first-year student. When the girl student went to lodge a complaint against the incident, the University security staff blamed the girl herself for the incident and questioned her character. The girl students staying in the hostel finally decided enough was enough and launched protests against the growing incidents of eve teasing on the campus and the insensitive attitude of the administration. Instead of listening sympathetically to their concerns, the University administration denounced those protesting as anti-nationals, and the police brutally lathicharged the peacefully protesting girls. The latest, according to today’s TV news, is that the Universtiy administration has asked the students to vacate the hostels and go home till October 2. Not only that, all colleges of Varanasi have also been closed down.

So, now, if you protest eve-teasing and molestation of women, then too you are a ANTI-NATIONAL.

On the other hand, the Constitution itself declares that all practices that violate the dignity of women must be given up, it declares it the duty of all citizens – so all those who want to uphold this Constitutional directive are anti-nationals. Indeed, that is because the RSS was against the Constitution when it was being drafted, and wants to replace it by Manusmriti, that openly sanctions oppression of women and declares them as second grade citizens.

This is the reality of the ‘Nationalism’ of the RSS and the BJP. 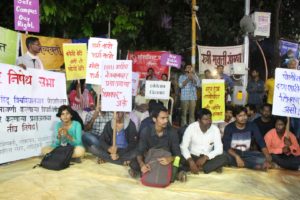