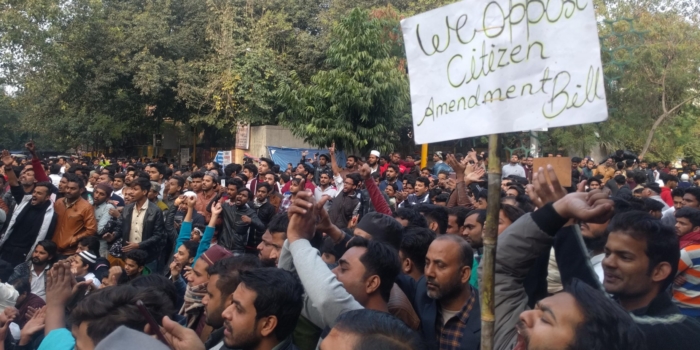 Appreciation:
At the outset, we thank the West Zone Task Force, Hyderabad Police, for getting medicines for the detained journalist Mubashir Khurram and allowing him to take the medicines yesterday night (8 February 2020), during his illegal detention.

Condemnation:
We condemn the indiscriminate detentions/arrests of peaceful protestors and journalists that have recently happened at appeal-protests in Hyderabad for the repealing of CAA/NPR/NRC. Yesterday this happened at the Mallepally flash protest in Hyderabad.

We urge the Telangana/Hyderabad police to discharge their duties impartially as per the law, as they are bound to do under oath.  They are bound to enable and to protect.

It was disheartening to hear of the picking up of the senior reputed journalist Janab Mubashir Khurram, Siasat Urdu Daily, when he was discharging his democratic journalistic duty of covering the flash protests at Mallepally, Hyderabad.

He has narrated to us his ordeal. We are refraining from reproducing the entire ordeal here that depicts illegal, below-dignity behaviour by the on-duty police of the West Zone Task Force, Hyderabad Police. We do not want the public to lose faith in the police and we want to strengthen the friendly bond between the police and the public.

Suffice it to say that he said, “I understood what it means to be a persecuted minority.” Such were the painful and disrespectful questions, statements and utterances from the on-duty police in their uniform from the West Zone Task Force, Hyderabad Police – brazenly against their service rules.

So, what was the illegality here? The flash gathering? A journalist doing his essential democratic journalistic duty? Can the task force release a justifying statement on this 14-hour detention from around 10 pm on 8 February to 12 noon on 9 February? We await this statement from their office.

Journalist Mubashshir Khurram and the protestors, on the other hand have not done anything against the law or the Constitution of India, in either covering the event or in participating in peaceful appeal-protests as at Mallepally.

We conclude our statement by urging the Hyderabad/Telangana ‘people’s friendly’ police to discharge their duties in favour of the law, the Constitution of India, and natural principles of justice.

We call on Hyderabad Police to give adequate protection to democratically conducted peaceful appeal-protests and enable their smooth conduct so that we can protect freedom/liberty for this generation and future generations of India.