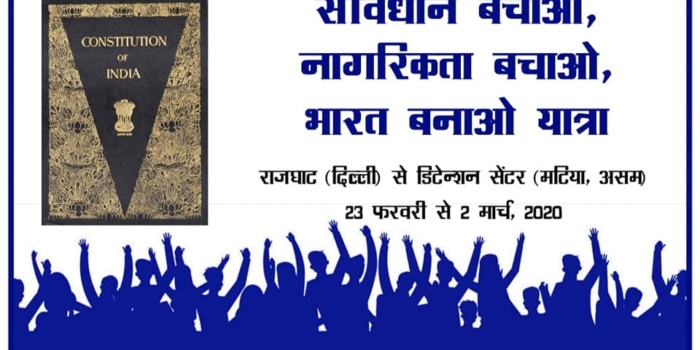 The Prime Minister had declared from the Ram Lila ground before the Delhi elections that there are no detention centres in the country in the context of nationwide anti-Citizenship Amendment Act and National Register of Citizens protests. But there were media reports of temporary detention centres being run in various jails of Assam and a permanent one being constructed in Gwalpara district. To verify the claim of Prime Minister a yatra was organised from Rajghat, Delhi to Matia in Gwalpara in the last week of February.  At the end of the yatra, a human chain was to be formed outside the under-construction centre to sympathise with people who’re in detention centres.

The Delhi-Assam yatra was organised by Khudai Khidmatgar, National Alliance of People’s Movements, Justice Forum, Assam and Socialist Party (India) with 18 yatris, listed below, from eight different states of India. The yatra started from Rajghat, Delhi on 23 February but was stopped by Uttar Pradesh police as soon as it entered the Aligarh district border. The UP administration would not allow it to go through Aligarh or Mathura. Finally, on the condition that yatra would not hold any meetings on the way to Bihar, it was allowed to proceed to Kanpur and by next night it had already crossed the Bihar border from Chandauli into Rohtas. In Kanpur, the local host Mahesh, who runs a home for underprivileged children, was pressurised by the police to not let the yatra stay overnight and yatris were kept under strict police vigil in almost detention like condition. The driver of the bus was taken away for the night to the police station. Yatra was not allowed to take a stop at a Lok Samiti centre run by Nandlal in Nagepur, a village adopted by Narendra Modi in his parliamentary constituency. The yatra which was scheduled to traverse through UP over 4 days was fast-tracked to cross the distance in 2 days. Police jeeps escorted it to ensure there was no contact with people or media in UP.

The yatra went through smoothly in Bihar visiting protest sites at Patna, Lakhminiya, Jalkaura, last two in Begusarai district and two meetings in Narayanpur and Kharik in Bhagalpur district. The host in Patna was Nashur Ajmal and in Bhagalpur Gautam Kumar Pritam. In West Bengal the police stopped the yartra at Samuktala in Alipurdwar district but upon arguing with the police that WB assembly has passed a resolution against CAA-NRC, they allowed it to proceed to Assam border.

At the Srirampur border, there was heavy police presence along with para-military fully armed to take care of any eventuality. There was full media presence from both sides Alipurdwar and Kokrajhar of the WB-Assam border. SDM, Gosaingaon of Kokrajhar and the district SP informed the yatra that section 144 of Cr.P.C. was in place in all three Assam districts, Kokrajhar, Dhubri and Gwalpara which fell on its way and that it would have to go back. Interestingly, contradicting the PM’s statement that there are no detention centres, the District Collector, Gwalpara in his official order prohibiting the formation of human chain there admitted that there is a ‘Detention Centre (under construction)’ in Matia. The yatra demanded that in order to prove the PM right the detention centre(s) under construction at Gwalpara and elsewhere in the country should be converted into schools or hospitals.

While the SDM and SP would not allow the yatra to proceed on the pretext of section 144, the yatris were arguing for their fundamental right of freedom of expression, free movement within the country and peaceful assembly. The yatra was even ready to move and form the human chain in police protection and be brought back to WB border on its return. Justice Forum and Krishak Mukti Sangram Samiti activists of local organisations were to join the human chain in the beginning but because of the administrative order nobody was allowed to assemble at the site. Advocate Shiv Kumar from Tamil Nadu, who flew into Guwahati to join the human chain was detained at police station in Gwalpara on 28 February and not allowed to proceed to Matia.

The administration and government in Assam had made up its mind to not let the yatra enter Assam. The yatris did not have any option but to court arrest for violation of section 144. Later in the day they were released on personal undertaking. However, it has been decided that activists part of yatra should visit the detention centre in Matia, if possible, with the help of a court order.