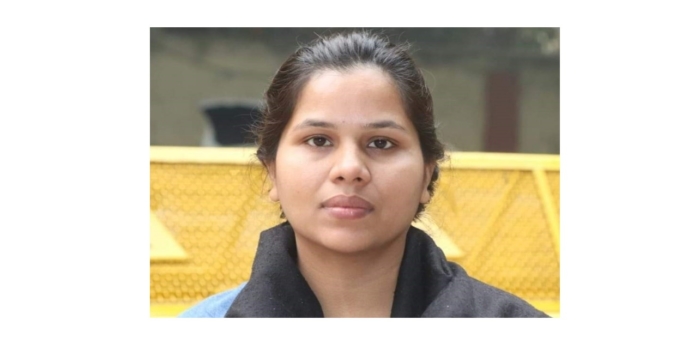 Bandana Kumari, also known as Bandana Pandey, born on 13/1/91, is a candidate of Socialist Party (India) from the Karawal Nagar constituency in upcoming Delhi State Assembly election. She originally hails from Gopalganj in Bihar and completed her B.A. from Patna Women’s College. After that, she completed her M.A. from Jamia Millia Islamia University, Delhi and she is currently pursuing her M. Phil. from Ambedkar University, Delhi. She has been very active in student politics and has been associated with Socialist Yuvjan Sabha, the youth wing of the party for several years. She answers some questions about her journey so far and her plans for Karawal Nagar:

How did you come to join politics?

I developed an inclination towards social work at a very young age because my grandfather used to run a school which provided free education to underprivileged children. For about fifteen years I actively worked on various social issues. But in the course of my practice of social work I realised that politics is also a form of social service, and that it is in fact a means to address social problems in a very fundamental, far-reaching and holistic way. That is when I thought of entering politics. I decided to participate in the CPSH elections at Ambedkar University, Delhi, which I was able to win to become a student representative.

When and how did you come to be associated with the Socialist Party (India)?

I first met Dr. Sandeep Pandey in the year 2005, in the context of my work as a social activist. I was very inspired by his thinking and his work. After the Socialist Party (India) was formed in 2011, he asked me to join the party many times. Finally, in the year 2014, I decided to join SP(I) and was appointed the National General Secretary of the Socialist Yuvajan Sabha.

Why do you think political participation is so important?

Politics is a means for serving society. The parliament and legislatures allocate public funds for spending and investment. The finance ministry creates the national budget. It is the ministers and members of the legislatures who take these important decisions which have a bearing on all of our lives. So it very important that young and educated people, who have an understanding of our society, who are sensitive to its many issues, and who themselves belong to marginalised and oppressed groups such as dalits and other oppressed castes, women, people from rural areas, enter politics and reach these positions of power. This will allow them to make lasting change by creating and implementing policies which favour the poor and the disenfranchised sections of our society.

The government taxes common people but does not provide them with even basic facilities. All the money is channelled towards politicians and corporations. This money needs to be spent to improve the living standards of poor people. Our per capita income needs to increase. Every person should be provided access to healthcare, education, employment, housing, electricity, clean water, public transport and personal safety. This vision can only become a reality through political action and political change.

What is the significance of socialism in today’s society?

Socialism focuses on society. If society improves so will the individual. We need to structure society in a way which ensures access to the basic resources necessary for the optimal development of the potential of each individual, so that they can be active participants in mainstream society and contribute to the development of our nation. The nation is thus strengthened through the development of the inherent abilities and talents of each individual, including its youth, farmers and women. This is how we can become a superpower, excel in technological research and innovation and increase our GDP.

As a member of the SP(I), what role do you see the party playing in national and local politics?

According to me, the Socialist Party (India)’s role in present-day politics is as follows:

1. To oppose all forms of injustice, exploitation and oppression in society.

2. To strive for the welfare and security of our youth, women and the unemployed.

3. To oppose the biggest threats to our country right now: CAA-NRC-NPR, corruption, unemployment and inflation.

4. To oppose the saffronisation of education.

5. To ceaselessly struggle to provide basic resources and necessities to all people.

6. To provide education to the young which imparts technical skills, fosters innovative thinking, ensures employability and helps develop a sense of appreciation and responsibility towards our country.

7. To oppose the dangerous and violent trends which are currently gaining strength in our country such as the practice of mob-lynching.

8. To oppose the privatisation of public sector enterprises such as the Railways.

9. To oppose the unconstitutional dissolution of Article 370.

10. To strive for the establishment of a secular and socialist society based on the principles of equality, freedom, community, justice, human rights and inclusive development, which is the vision of our constitution.

Why have you chosen to stand for election from the Karawal Nagar constituency?

The Karawal Nagar constituency is the most underdeveloped constituency in Delhi. The people who live here may be considered residents of Delhi but they are marginalised and excluded from Delhi to a very large extent. Every election, politicians come here and make tall promises and then forget them after coming to power. The majority of the population of Karawal Nagar consists of poor, working-class, labouring people whose voices are suppressed and ignored in spite of their proximity to the nation’s power centre. It is for these reasons that I am standing for election from this constituency.

What are the biggest problems and challenges in Karawal Nagar?

Our commitments towards the resolution of the major problems faced by the people of Karawal Nagar, which are the basis of my election campaign, are as follows:

1.To solve the traffic problems which are an obstacle in the development of Sonia Vihar, we promise to construct Double Pusta Road.

2. We promise to solve all drainage and sewage-related problems, ensure the covering of all open drains, and the eradication of all diseases in Karawal Nagar, particularly in the Sonia Vihar area.

3. We promise to end the practice of illegal extortion of money from homeowners by officials in Karawal Nagar.

4. We promise to fix all damaged roads and lanes in Karwal Nagar, particularly in the Sonia Vihar area.

5. We also promise to extend the Metro line to Karwal Nagar.

6. We promise to instal street lights on all roads.

7. We are committed to improving women’s safety.

8. We promise to ensure the proper and timely transfer of pensions for elderly people and widowed women.

9. We promise to ensure that issues relating to Karawal Nagar’s development and welfare, which have been on the sidelines of Delhi’s politics for so long, take centre stage.

Ignored and disregarded by Arvind Kejriwal, Manoj Tiwari and Kapil Mishra for so long, it is time that the rights and dignity of the people of Karawal Nagar is restored.

How do you plan to fulfil these promises?

1.For the construction of Double Pusta Road, we will work in collaboration with the Forest Department, Public Works Department and all other stakeholders to ensure fast and efficient execution on this promise.

2. To improve the drainage system and end all related health issues we will work closely with the Municipal Corporation and the Jal Nigam, and act on this promise with urgency.

3. The issue of monetary extortion from homeowners will be dealt with by appointing our representatives in each neighbourhood who will investigate, expose and take legal action against individuals involved in these illegal activities.

4. To improve the quality of roads and lanes we will work closely with the PWD to ensure a quick and efficient resolution of this issue.

5. We will end the unemployment of youth and provide new employment opportunities to women by working with government and private organisations and companies. We will lobby for the establishment in Karwal Nagar of manufacturing facilities for small parts used by big industries.

6. We will also promote the establishment and development of local businesses through the provision of all necessary facilities and reducing operating costs.

What is your message to the people of Karawal Nagar? Why should they vote for you?

If I win in Karawal Nagar, I will work in collaboration with the municipal corporation, the state government, the central government, NGOs, MLAs, Ministers and Parliamentarians, and solicit their political and financial support to provide the residents of Karawal Nagar with all basic necessities.

To support Bandana’s election campaign, please send your donations to the following account: