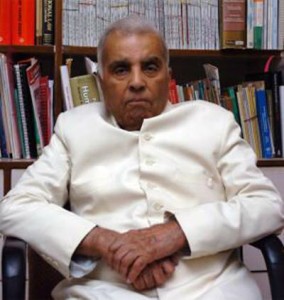 No Conflict between Hindi and State Regional Languages

For some time past a misguided effort is being made to castigate India for asking U.N. General Assembly of U.N. to include Hindi as one of the languages at U.N. They seem to suggest that English should be recognized as language of India because Hindi is not understood in whole of India, but they conveniently forget that Hindi is the language of over whelming number of people. Of course it is not in any way an attempt to reduce the respect owed to other Indian languages which are of equal status with Hindi. It is a question of whether a sovereign India should have its own language just as England, France, Germany are provided at U.N. This would show Hindi in equal position at international fora with other foreign languages. So that the demand the country must have one language of its own at international forum at U.N. for this purpose cannot be objected.

In presenting Dr. Lohia as Hindi fanatic, even against the other languages of India is to do great injustice to his philosophy. No doubt Dr. Lohia was against the exclusive small number of English knowing people about 4% to represent at U.N. He treated all Indian languages on equal footing. But each country can have only language to represent it at international fora. So at U.N. one language alone can be recognized. This is why one of the largest spoken Language Hindi should be at U.N. fora.

Let me give his philosophy of Angrezi Hatao in his own words;

“It is now impossible to banish the public use of English without the desire of the people. The policy of removal of English gradually, which has been adopted by the government of India, is proving more dangerous than the policy of retaining English forever. The chief problem is the removal of English and not the establishment of Hindi. This clarification is necessary, for the non-Hindi speaking states like Mysore, Bengal; Tamil Nadu should have the option not to use Hindi at all. They may use their own language but they also must remove English.”

“A correct language policy has been evolved. Hindi should be the language of the central government immediately after, the gazetted posts of the central government should be reserved for non-Hindi speaking areas for ten years. The centre should correspond with states in Hindi and the states should correspond with the centre in their regional languages until such time they learn Hindi. The medium of education up to graduate course should be the regional language and for post-graduate studies, it should be Hindi. The district judge and magistrate may use their regional languages whereas the High Court and Supreme Court should use Hindustani. The speeches in Lok Sabha should generally be made in Hindustani but members who do not know Hindi may speak their own language. Although it is a correct language policy, any state or its government which may not like to adopt this policy and wishes to continue with its regional language should have the freedom to do so. It should not be objected to although it will be a regrettable situation. I believe this is a temporary difficulty. Therefore, keeping in view the pernicious propaganda and in the interest of the nation, the chief aim of our movement should be removal of English and not the establishment of Hindi. It is certain that Hindi shall be established on an all India level in due course. But if in some states or even on the all India level. Marathi or Bengali is established, we should not mind it.”

I can recall his pain when he read about the misunderstanding of his position on languages and which caused the set back to the development of National languages and correct language policy. It happened sometime in 1960s when I had the privilege of Dr. Lohia coming on socialist party programme to Chandigarh. He stayed at my residence – at that time I was the chair person of the socialist party (Punjab Branch).

I remember however a very pained Lohia when he was staying with me at Chandigarh on next morning, News had came that Anti Hindi Agitators in south had burnt Hindi periodicals. I still see him sitting quietly with a sad took on his face sitting in the verandah lawn of my house at Chandigarh and telling me softly “Rajindar – movement for Hindi is dead – when it will be revived I do not know”. Dr. Lohia was not a Hindi chauvinist. He was for State languages – he believed that presence of English knowing minority of which even now are only 4% will never let poor become the vehicle of politics. He accepted the supremacy of Tamil & Telugu language in the States. He was not against English language as such. He was of the view that in no democratic people’s state, bureaucracy can effectively work for people’s policies unless the administration is carried out in states – in their own people’s language.