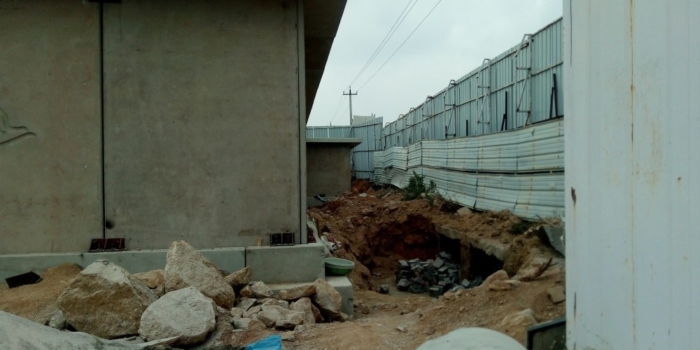 On 20 February 2020, the National Green Tribunal Southern Bench, Chennai heard case 39/202 for the restoration of Mamasani Kunta, Puppulguda, Gandipet Mandal, RR District, and directed that Phoenix Spaces Pvt. Ltd. that has barricaded the lake and raised buildings on the inflow channel and inside the lake, be impleaded in the case. The next hearing is on 26 February 2020.

During the hearing petitioner Dr Lubna Sarwath argued that the Supreme Court, had with due respect for nature and for the law, ordered and got executed the demolition of Maradu highrises in Kerala and that the construction inside Mamasani Kunta is not even as high as Maradu flats.

Instead, Telangana government is announcing it as an achievement to draw waters from 250 to 300 km away for a city that is full of lakes, ponds and has a river flowing through it.

She appealed for early restoration of Mamasani Kunta. She was directed to implead Phoenix Spaces Pvt Ltd as respondent.

She argued that destruction of Mamasani Kunta was in full knowledge of Irrigation officials, MRO, Zonal Manager TSIIC and HMDA officials. TSIIC officials had themselves conducted inspections multiple times and had the culvert of inflow channel excavated (though partially). NGT may please, on basis of glaring official evidence and field observations and confirmation of officials, give an order.

But the judges stated that the Phoenix name was mentioned hence other issues pertaining to environment clearances and permissions could not be addressed.

The bench assured that they shall render justice in the matter. Judges posted the case for 26 February 2020 with Phoenix Spaces Pvt Ltd included as respondent.