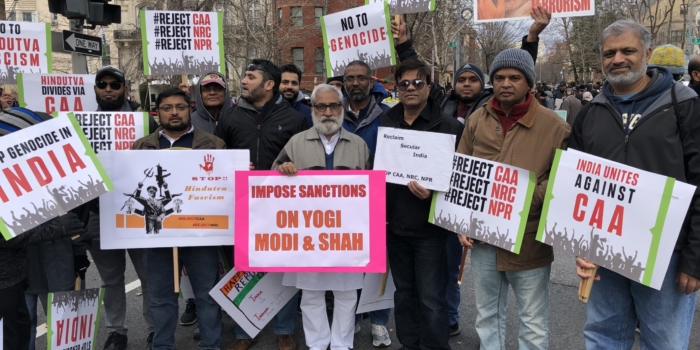 In 27 years of working as an activist, I’ve experienced unprecedented curbs on the fundamental rights of freedom of expression, to assemble peaceably and to move about anywhere within India over the past 6 months. I was put under house arrest in Lucknow, the capital of the north Indian state of Uttar Pradesh, on 11 and 16 August and 19 December 2019. The first two times on the issue of Kashmir and on the third occasion on the issue of the Citizenship Amendment Act and National Register of Citizens. On 17 and 19 August 2019 and 15 January 2020 I was prevented from visiting Ayodhya. The ruling Bhartiya Janata Party government doesn’t want any alternative view on Kashmir, Ayodhya or CAA-NRC to be expressed.

The Government became the enemy of people who participated in protests against the CAA and NRC after the Act was promulgated in December 2019. The crackdown started with Jamia Millia University in New Delhi and Aligarh Muslim University in UP. The police used tear gas shells and stun grenades to attack students. Mohammad Tariq, a PhD student at AMU, had to get one hand amputated, Nasir lost one thumb and both hands of Tanzim were fractured. First Information Reports against 57 named and 1,200 unnamed were lodged and 26 students were detained on 15 December 2019, and were released after local protests and road blockades by people. Ahamad Raza Khan, a student of Khwaja Moinuddin Chisti Urdu Arabi Farsi University in Lucknow was rusticated for merely giving a call for a demonstration.

On 19 December, when the call for nationwide protests was given, masked young men appeared from nowhere and indulged in arson and rioting during the peaceful protests in Lucknow. The police didn’t stop them in spite of activist Sadaf Zafar pleading with them, of which there is recorded evidence. Later activists like Sadaf Zafar and Pawan Rao Ambedkar were arrested along with a number of common people, some of whom participated in protests and some were just passers-by. Activist Deepak Kabir was arrested when he went to see Sadaf Zafar at the Hazratganj Police Station in Lucknow. Activist Robin Verma and ‘The Hindu,’ a prominent Indian newspaper, correspondent Omar Rashid were arrested by police on the evening of 19 December. Sadaf Zafar, Pawan Rao Ambedkar, Deepak Kabir and Robin Verma were subjected to torture inside the Hazratganj police station before being sent to jail and Omar Rashid was abused because of his Kashmiri background and then let off after some senior journalists were able to put pressure on the Chief Minister’s Office. Septuagenarians Advocate Mohammad Shoaib and retired Dalit Inspector General of Police S.R. Darapuri were arrested, even though they were detained at their homes on the day protests and violence took place and sent to jail. The time and place of the arrest of Advocate Shoaib and Darapuri were wrongly shown.

Advocate Shoaib was not produced before any Magistrate nor did he sign any arrest memo. A battery rickshaw puller Mohammad Wakeel was killed by bullet injury in Lucknow. The CM Yogi Adityanath in a meeting on the evening of 19 December with senior administrative and police officials spoke of taking revenge on people who had indulged in violence and later also said the cost of damage to public property will be recovered from the rioters. After this police went berserk and indulged in brutal repression. They vandalized homes of well to do Muslims in Muzaffarnagar like Hamid Hasan, Intezar and Farooq in Sarwat and Naseem Ahmed and Ishtekhar in Khalapar, lathi-charged gatherings of Muslims coming out after performing Friday Namaz on 20 December in Meerut and even opened fire. In Muzaffarnagar, local Member of Parliament Sanjeev Baliyan is alleged to have led the rampaging mob which even attacked a Sadat hostel of an orphanage. A number of children were detained from here. 21 years old clothes vendor Noor Mohammad was killed by a bullet injury in his forehead. 13.5 years old Mohammad Ahmed, a student of class IX of Himalayan Public School, and his elder sister Rukaiyya, who was about to get married, received injuries in leg and head, respectively, when about a hundred police personnel attacked their home.

In Meerut 17 people have received bullet injuries, 5 of whom officially and one more unofficially are dead. Among the dead include Aleem, 24 years old roti maker, Mohammad  Asif, 20 years old battery rickshaw puller and Mohammad Mohsin, 30 years old scrap dealer. Aleem was shot in temple and Asif and Mohsin in chests. Asif, who had a Delhi identity card, was accused by police of having brought 20-30 people from Delhi to create a riot in Meerut.

In Kanpur, where 3 deaths have taken place and 28 people have been injured, 4 of them seriously, the police is alleged to have used private arms. The dead include Rais, 30 years old daily wage labourer, Aftab, 30 years old painter, and Saif, 26 years old. Mustakeem, 22 years and Adil, 19 years, are in jail and their families are devastated.

Over 20 deaths have taken place in U.P., the only state except for Karnataka where people have died of bullet injuries. Except for a death in Bijnor police has refused to acknowledge that the deaths have been caused by their weapons.

When the injured were taken to government hospitals, they refused to entertain them saying that there were instructions from the administration not to treat people with bullet injuries. A number of people injured in police firing did not go to any doctor for the fear of their names being included in the FIRs making them liable to pay for damage to public property caused due to rioting.

Even though common citizens including non-Muslims participated in protests almost everywhere, the police and administration targeted only Muslims to create an impression that it was Muslims who created trouble. Prime Minister Narendra Modi even said that miscreants can be recognized from their dress. The ruling BJP was clearly indulging in politics of polarization and communalization by doing this.

All the more than 20 people who died of bullet injuries in UP are Muslim youth. It was violence not between two groups of citizens. There were people on one side and police on the other and police is the one who had arms. The police version that bullets were not fired by them doesn’t hold any credibility.

Advocate Mohammad Shoaib heads an organization called Rihai Manch which fights for the right of Muslim youth falsely implicated in terror cases. He has got 13 such youth acquitted from Court. Rihai Manch was targeted as one of the main organisations which organized the protests.

The pattern is clear. It was the Muslims who have been attacked during vandalism, arson, looting and police firing and it is they against whom FIRs have been registered. More than a thousand people who went to jail are mostly Muslims. The modus operandi is to make victims the accused. As FIRs have been registered against mostly Muslims it is now assumed that they are the ones who created trouble and hence cost of damage to any public property must be recovered from them. Thus they have been doubly victimized. A number of people have received notices for recovery in Crores of rupees.

In nationwide protests against Citizenship Amendment Act and National Register of Citizens, peaceful protests were organized by citizens all over the country. Some protests like in Hyderabad has 6-7 million people but they became violent only in states where Bhartiya Janata Party was in power and had direct control over the police like in Delhi.

Academic campuses like Jamia Millia University in Delhi and Aligarh Muslim University was attacked by police without seeking permission from Vice-Chancellor to enter the campuses. One student lost a hand, another a thumb and yet another an eye.

In Lucknow some masked men, who could not be recognized by local people, appeared from nowhere and created riot and arson. Police did not intervene until sufficient damage was done and then cracked down on social-political activists and common protestors and in some cases simply passers-by. Activists were tortured at the police station before being sent to jail. Journalist of prominent newspaper Hindu, Omar Rashid was abused because of his Kashmiri background. In Muzaffarnagar police along with workers of RSS-BJP directed by local MP Sanjeev Baliyan attacked houses of well to do Muslims and an orphanage.

Over 20 people killed in UP by bullet injuries were all Muslim youth. Police claims, except in one case, it didn’t happen because of their weapons. In Kanpur police have allegedly used private arms so that they can’t be held accountable. Most of the over thousand arrested are also Muslims. Most names in FIRs are those of Muslims. Hence they have been shown as perpetrators and it is from them that the cost of damage to public property is sought to be recovered. Hence innocent Muslims and activist have been doubly victimized. Most victims or their families have not been able to file FIRs against the police as they fear that their properties may be seized towards the recovery of the cost of damage to public property from them if they are identified.

It is a politics of divisiveness, polarization and communalization for political gains. The government has become an enemy to a segment of the population, Muslims and people who don’t agree with its views. The Chief Minister of Uttar Pradesh Yogi Adityanath asked the officials to take revenge on people who indulged in violence. After this, the police went berserk and committed severe brutality upon people. Some districts where police chiefs didn’t follow CM’s orders and used their own wisdom to control mobs, there was not so much violence. Hence the chief executive can be directly held responsible for all the police atrocities.

The fundamental rights of people are being curbed. Right to freedom of expression, to assemble peaceably without arms and to move around throughout the territory of India are being violated. It is creating problems for even the women who are protesting with their small children. The brutal repression of the movement against CAA/NRC has created an atmosphere of fear in which women in large numbers are now on 24 hours protest at various places in India, most importantly in Saheen Bagh, Delhi. State Assemblies of Kerala and Punjab have passed a resolution against CAA and NRC and a number of other State Governments where opposition parties are in power have announced that they will not implement NRC.